In the beginning was PoliticalArithmetik, created the weekend Katrina hit New Orleans.

In 1996 I co-founded Pollster.com. In 2010 HuffingtonPost bought Pollster and I moved on.

In 2011 I've created PollsAndVotes.com, a site for more comprehensive analysis of polling and vote data. PollsAndVotes is ramping up for 2012. Come visit.

Meanwhile, this site is the archive for PoliticalArithmetik, my first love.
Posted by Charles Franklin at 6:52 PM 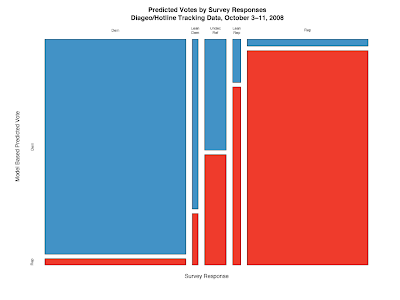 How will undecided voters break, and will racial attitudes color their votes?

We've seen an enormous amount of speculation but little evidence based on data, so let's try to tip the balance back to empirical evidence.

Thanks to the Diageo/Hotline tracking poll data, we can model individual vote choice and see what we would expect of undecided voters.

During October 3-11 our colleagues at the Diageo/Hotline poll included a racial attitude question we had previously used in the Big Ten Battleground survey in September and which NBC/Wall Street Journal used in January. That question was shown in both the earlier polls to have a statistically significant effect on vote choice, even after controlling for other political attitudes and demographics.

The question text is: "I'd like you to tell me whether you strongly agree, somewhat agree, somewhat disagree or strongly disagree with the following statement. ... African Americans often use race as an excuse to justify wrongdoing"

I model the vote choice for those who expressed a preference with a model using a variety of attitudes and demographics, including favorability to Obama and McCain, party id, marital status, kids at home, education, race, age, sex, church attendance, region and urban, suburban or rural residence. Then I added the racial attitude responses from the "black excuse" question. To check against people hiding their feelings by refusing to answer the "black excuse" question I also included a variable to capture the effect of refusal to answer.

This model produces a predicted probability of voting for McCain or Obama, including predicted probabilities for those who had said they were undecided or who refused to respond to the vote question. From this we can estimate the likely vote of undecided, and compare the estimates to the responses of those who gave a vote preference in the survey.

Bottom line: Undecided and refuse to say voters are estimated to break 50% for McCain and 50% for Obama. As even as it gets. There is no evidence here of a large bias towards McCain that is hidden within the undecided respondents.

Nor is there evidence of a pronounced racial bias among these undecided voters as compared to the public at large. Among the undecided 27% strongly agree and 32% somewhat agree on the "black excuse" item. For the public as a whole 26% and 32% give the corresponding responses.

The model does a good job predicting survey response as well. 97% of both Democratic and Republican voters are predicted by the model to vote that way. For those who say they only "lean" towards one party or the other, 77% of Democratic leaners and 80% of Republican leaners are predicted to vote as they lean. The symmetry of results here suggests that there is not a visible bias in the model estimates for either party or for intensity of preference.

Finally, what happens if we ignore racial attitude and predict vote among the undecided without it? The split is 52% Obama to 48% McCain. So at most the impact of incorporating racial attitude in the model is a rise of 2% for McCain among undecided. Given the sample sizes involved, that is well within the margin of error. And if we take out candidate favorability from the model we get estimates of 52-48 without racial attitude and 53-47 with racial attitude.

So what can we conclude? There is no evidence of a hidden support for McCain among undecided voters. They split more evenly than does the "decided" pool of respondents, who split 54-46 in this sample (Oct 3-11) but that's well within normal expectations and is a modest difference in any case.

In a year of endless discussion about racial effects there has been far more speculation and far less data analysis than is good for us. Let's put our data on the table before continuing to opine about this subject.

Cross Posted at Pollster.com
Posted by Charles Franklin at 8:40 PM

It takes 270 to win this game. McCain is behind in national polls, down 7.5 in our Pollster.com Trend Estimate. But as you know, this is a game won in the states. So what does it now take for McCain to eek out a 270-268 electoral vote win?

The chart above shows the states allocated to candidates based on my Political Arithmetik trend estimate. The classification of states is the same as Pollsters, but differ slightly in the order.

The states are ordered left to right according to the Obama minus McCain margin. Yellow states are classed as tossups but are allocated to candidates based on who is ahead in the trend, no matter how small that margin may be. The width of each state's block is proportional to the state's electoral vote.

With this classification, Obama has 364 electoral votes to McCain's 174.

So what would it take for McCain to come back at this point? Ohio and Florida, above all else.

Ohio and Florida are the largest states that are in Obama's row but still close. McCain led in both states in August and the first half of September. Without them, it is hopeless. With them, he still needs more, but they are the necessary conditions for a win.

Can he do it? The trends in Ohio and Florida offer a small glimmer of hope. While most states have continued to move in Obama's direction (see PA, MI and WI), these two have leveled off, and in Ohio moved back in McCain's direction. 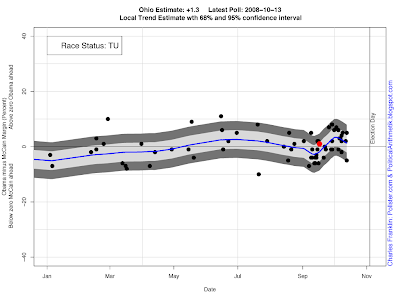 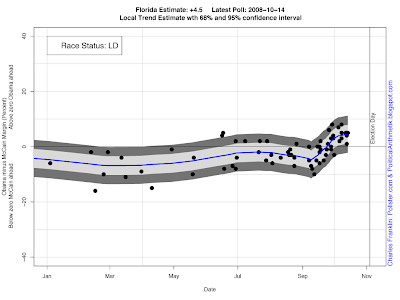 No matter what, McCain has a long shot to get to 270. But The road has to go through Ohio and Florida and both states are looking better for him than any others he must win. What he is doing in Pennsylvania and Wisconsin is a mystery to me.
Posted by Charles Franklin at 12:07 AM 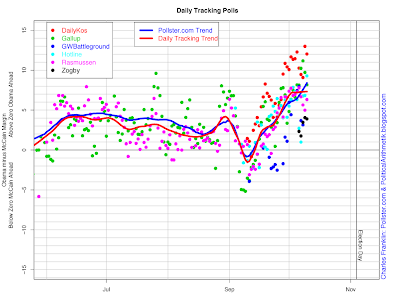 There are six daily tracking polls currently reporting data, up from just two (Gallup and Rasmussen) during most of the year. How are they doing?

Compared to our Pollster.com trend estimate based on all public polls, not too bad. The trend based on trackers only is close to that for the all polls trend, with an average difference of just 0.35 percentage points, a very slight under-estimate of the Obama minus McCain margin. Recently the difference has been negligible, with most of this difference coming early in the year.

A bit of visual inspection shows the GW Battleground poll seemed more out of line until they shifted their party weighting plan after a few days. Likewise Hotline had a couple day "hiccup" but has returned to trend.

What about house effects? The range is moderate, from +4.3 points on the margin for Daily Kos, to -4.2 points for Zogby, though the latter has only just started polling so the confidence interval is wide. 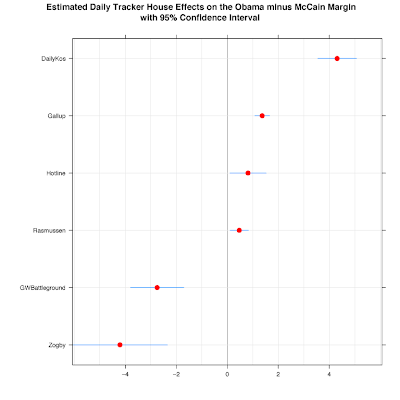 Posted by Charles Franklin at 12:31 PM 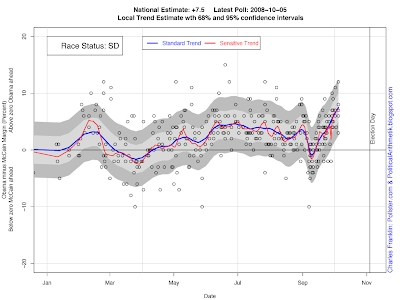 Now that you can play with the sensitivity of the trend estimate on our interactive charts at Pollster.com, the need for my sensitivity comparisons is somewhat less. But, it is interesting to see that just now the sensitivity used in our national trends makes very little practical difference.

My pals, "Ready-Red" and "Old-Blue" are in good agreement on both the magnitude of the Obama surge in the last three weeks, and the current standing of about a 7 to 7.5 point Obama lead.

Red had a moment of indecision last week when a couple of polls showed McCain ahead, but after barking in that direction, Red came back to Old Blue in seeing continued upward movement for Obama. You gotta love Red for his sensitive nose, but sometimes it distracts him from the big picture.

So here is a question to ponder. How much more upward lift can there be for Obama? He's already well beyond his previous best. Does anyone believe he really can hold a 10 point lead through the election? If not, then we should see some flattening out in the next few days, regardless of the debates.
Posted by Charles Franklin at 2:12 PM 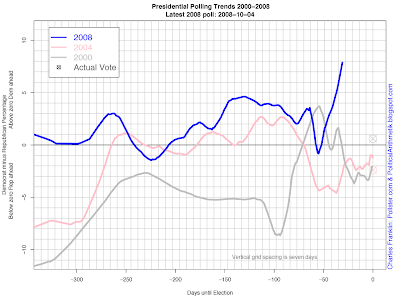 The 2008 campaign had not seen a really big move in preferences until the financial crisis hit three weeks ago today. Since that time, the Obama-McCain margin has shifted almost 9 points in Obama's favor, converting a small McCain lead into a substantial Obama advantage.

This swing reversed the gains McCain made with the Republican convention and the week after during which he picked up about 4 points and took the lead for the first time since March.

The Bush counter-assault in 2000, after Gore's surge, was almost eight points, and began at almost the same point in the campaign, about 57 days out.

Voters are making up their minds at about the same rate as they did in 2000. If this year follows that pattern, look for some serious decision making over the next two weeks. 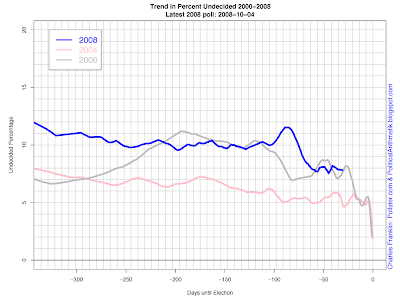 Posted by Charles Franklin at 1:41 PM

If you can't resist the urge to play with the data, we have new charts at Pollster.com that can satisfy your need. These are interactive versions of the charts here and previously at Pollster. You can exclude pollsters or methods. You can change the sensitivity of the fit to either more sensitive or less sensitive than our standard fits here.

Here is a sample chart for Ohio, using our default values:

And here it is again but mail and Internet polls excluded and more sensitivity:


Give it a try and let us know if you run into any problems. You can embed the results of your experiments on your own page, though not the interactive features.

At the moment the embedded graphs are scaled at 450 pixels wide. To fit them here I edited the html code to make the width 400 and the height 308. I hope we can automate that soon, but meanwhile if your width is fixed and below 450, changing two lines in the embedded html will fix it for you.

These charts are available for a growing number of states at Pollster.com. Stop by and play!

Charles
Posted by Charles Franklin at 10:48 AM 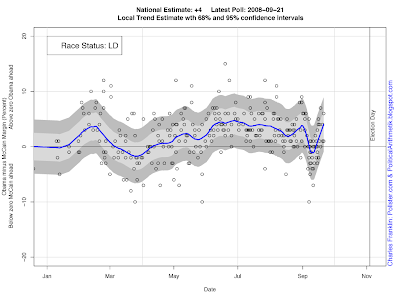 Obama has now recovered his lead in national polling, rising at or above his post-DNC, pre-RNC level. This sharp turnaround erases the very sharp pro-McCain/Palin convention bounce we saw in early September.

But the Obama recovery is not concentrated in Democratic states. As with the McCain advantage, this turn is visible in all three types of states-- Red, Yellow and Blue. 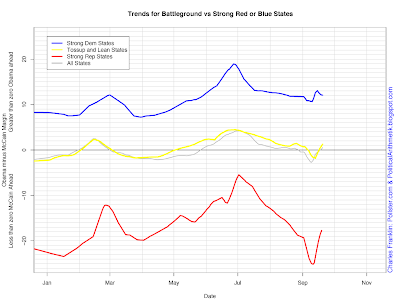 The biggest recovery is actually in the Red states, where McCain enjoyed his biggest bounce. Those states are not back where they started, or even a shade less pro-McCain, but they are a far ways from being "close".

The states we have classified as tossup or leans (what I'm calling yellow here, though on the map leans are light red or blue) have also seen a significant Obama recovery. The range of movement is rather modest, but the roughly three point McCain gain has now been balanced by a 3+ point Obama recovery in these most contested states, putting Obama up by just over a point.

Dem states showed a small move to McCain and have now seen an Obama recovery, though with a one point fall off most recently.
Posted by Charles Franklin at 11:24 AM