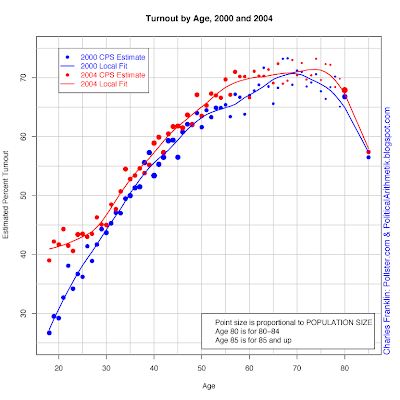 It's all about who votes. Those that do win. Those that don't lose. The chronic losers in American politics are the young who famously turn out at low rates election after election.

This year, those young people are of great interest. Allegedly they will be mobilized in huge numbers, and allegedly they will vote strongly for Barack Obama. The latest available Gallup weekly estimate (July 28-Aug 3) shows Obama leading 56%-35% among 18-29 year olds, while McCain leads 46%-37% among those 65 and older.

But will the young vote? And how much difference does it make when they don't?

The chart above shows the turnout rate by age for 2000 and 2004, based on the Census Bureau's "Current Population Survey (CPS)", the largest and best source of detailed data on turnout. The most striking result is just how low turnout is among those under 30 compared to older voters. No age group 18-29 managed to reach 45% turnout in 2000, and only two made it in 2004. Not one single age group over 30 fell so low in either year. Despite a little noise for each group, the pattern is a strong rise in participation rates with every year of age at least until the late 60s, after which there is some decline. Yet even among those 85 and over the turnout rate remains above 55%, more then 10 points higher than among their 20-something grandchildren and great-grandchildren.

The second striking feature of the chart is that the young can be mobilized a bit, under the right circumstances. Turnout among those under 30 rose significantly in 2004 compared to 2000. While turnout went up among all age groups, the relative gain was clearly greater among those under 30. While mobilizing the young is difficult, these data show that it is possible to get significant gains, at least relative to past turnout.

Even so, the "highly mobilized" 20-somethings of 2004 still fell behind the turnout of their 30-something older siblings. A supposed Obama-surge among the young may still not catch up with those even a bit older.

The irony is that the young are a large share of the population, but not of the electorate. The chart below shows the population by age in 2004 (it shifts a little by 2008 but not enough to change the story.) 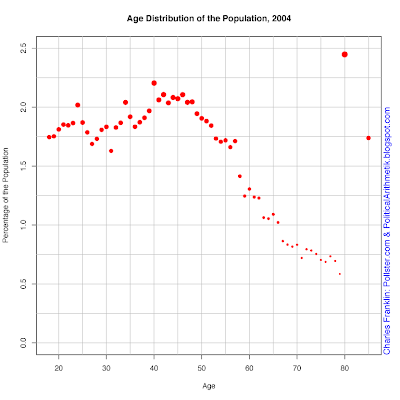 The "boomers" in their 40s and 50s remain the largest group, but for our purposes there are two important points. Those under 30 make up a substantial share of the population, while those 60 and over represent a substantially smaller share at each age. 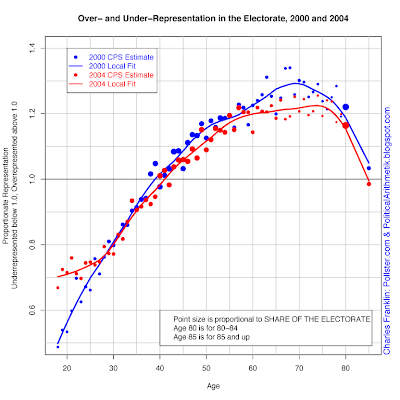 So what are the implications? If you gave me a choice of being wildly popular with the young or moderately popular with the old, I'd take the old any day. They are far more reliable in voting, and while their population numbers are small they more than make up for it in over-representation thanks to turnout differences.

There is much conversation about "youth" turnout this year. Perhaps we will indeed see another rise, as we did in 2004. But unless something truly unprecedented occurs, no one can win on the young alone. The gap in turnout is simply too large.

But is age destiny? If there were constant differences in partisan preference by age, then perhaps so. But there aren't. Despite being supposedly "old and set in their ways", those 60 and up shifted their votes more than any other age group between 2000 and 2004. In 2000, the 60+ vote went to Gore by a 4 point margin. In 2004, however, those 60+ went for Bush by 8 points. That net 12 point swing, multiplied by their over-representation means a lot. 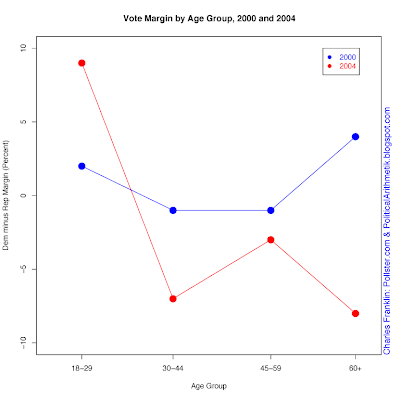 The 20-somethings also shifted, from +2 for Gore to +9 for Kerry. Coupled with their surge in turnout, the younger voters kept Kerry close in 2004 when he was losing in every other age category. But it wasn't enough to win.

The Obama campaign may be right that they can gain votes by mobilizing the young. But the old play a bigger role in elections, and they are not imovable in their vote preferences. Indeed, they make the youngest group seem a bit static by comparison. It is not the candidate's age that will be the key to winning the votes of those 60 and over. Issues and personality will play a large role. Any candidate would be well advised to recognize that the dynamic swings among older voters coupled with their substantial over-representation makes them a potent force for electoral change.

P.S. At the cross post to Pollster.com, Michael McDonald noticed that my plots were based on population percentages rather than percentage of citizens. That's a good catch and I probably should have used citizens in the first place. But the qualitative results don't change at all, so my story remains exactly as it is above. The precise percentages quoted do shift a little bit, but not in ways that change any of the conclusions. Therefore I've left the text above as it was, but append the first three figures, revised to include only citizens, here for completeness. Thanks to Michael for pointing this out. 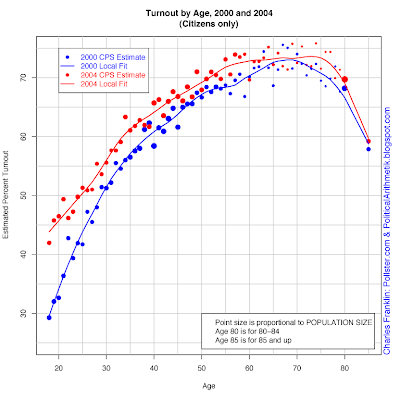 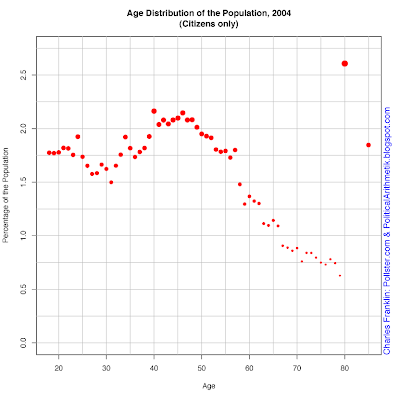 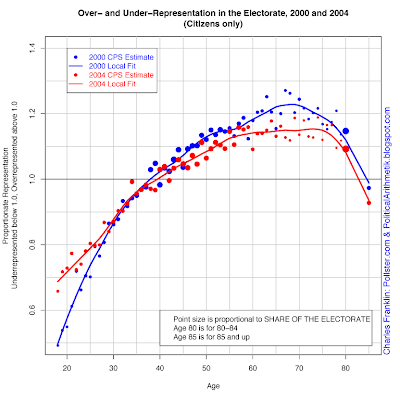 Posted by Charles Franklin at 3:41 PM