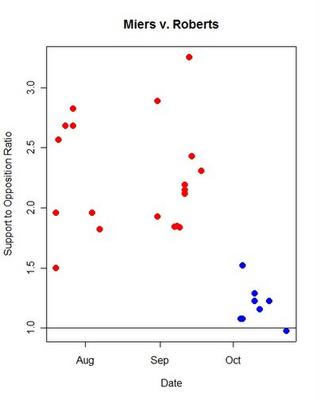 Support to opposition ratio. Roberts in red, Miers in Blue.


Harriet Miers withdrew her nomination for the Supreme Court this morning. President Bush "reluctantly accepted" her decision to withdraw.

While Miers drew strong opposition from the conservative legal movement, her support in the mass public never approached the levels of support for now Chief Justice John Roberts.

Polling on Supreme Court nominees is tricky because large portions of the public pay little attention and lack information to support their judgments. In Robert's case, the median "Don't Know" response was 27%, and the mean 29.5. Even at the end of his confirmation process, in September, the median rate of "don't know" responses was 27%. For Miers, who was a nominee for less time, the median DK response was 31.5% and a mean of 34.6%.

To avoid confounding "don't know" with opposition, I look at the ratio of support to opposition, removing those without an opinion. This lets us focus on the more attentive public who may have more meaningful opinions, and avoids depressing apparent support due to high levels of DK. For example, Roberts median support was only 50%, which alone suggests weak support. However, his opposition median was only 24%, with the rest not holding an opinion. This results in a 2-1 support to opposition ratio, and a healthy confirmation in the Senate. As the figure shows, there was little trend in the support ratio for Roberts, which mostly ranges between 1.9 and 2.6 throughout his confirmation process.

The Miers support ratio is strikingly lower. Her median ratio was only 1.2, with half of the polls putting this support between 1.07 and 1.24. Her highest support ratio was equivalent to Robert's lowest ratio. And in the last poll released before her withdrawal, Miers' support ratio had fallen below 1.0, to 0.98 in the Gallup/CNN/USAToday poll of 10/21-23.

The Miers nomination collapsed due to strong conservative elite opposition and lack of support in the Senate, rather than public opposition or outrage. But the public perceptions reflect the failure of the administration to build a convincing case for her qualifications.

(Data in the figure reflect all public polls asking some form of the question "Do you support or oppose John Roberts/Harriet Miers nomination to the Supreme Court". There is quite a bit of variation in wording, which I have not statistically modeled in the figure. Such modeling would probably reduce the variation a bit for both candidates but would certainly not affect the central conclusions.)

Posted by Charles Franklin at 1:36 PM