The Supreme Court will shift only slightly right 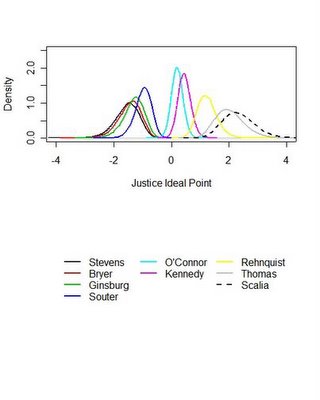 
The nomination of Judge Samuel Alito to replace Justice Sandra Day O'Connor has dramatically changed the public debate over the nominee compared to that of either Harriet Miers or now Chief Justice John Roberts. Roberts high quality but lack of a paper trail allowed his hearings to avoid direct confrontation over his positions. Miers weak qualifications allowed judicial conservatives to dominate the debate, again avoiding a direct ideological and partisan confrontation. Judge Alito, in contrast has very high qualifications, which I think cannot seriously be questioned, plus a long and clear track record of judicial opinions which will be strongly attacked by liberals and defended by conservatives. The hearings will focus on the most extreme statements that can be found by liberals in his published opinions, a defense of his views by conservatives, and an interesting opportunity to see how this plays out with the mass public. (We visited this issue before here.) It is going to be fun. This is the judicial war that both extremes wanted to have.

But how much is it likely to matter for the alignment of the Court? Both sides will claim much but the evidence is not so much.

The key to any Court is the median voter, the decisive fifth vote for any decision. In the Rehnquist Court, that vote was O'Connor's. In the Roberts Court (with Alito replacing O'Connor) that fifth vote will be Kennedy's. But as the figure above shows, Kennedy is only slightly to the right of O'Connor. Even if we assume Alito is as conservative as Scalia, and that Roberts turns out to be to the right of Rehnquist, there remain only four votes for very conservative positions. Someone must convince Kennedy to join the four most conservative Justices. (And I continue to wait for the evidence on Robert's positions.)

This configuration raises an interesting problem for the Roberts-Alito additions to the Court. Kennedy was only slightly to O'Connor's right. But there will be a substantial gap between Kennedy and the group of Roberts-Alito-Thomas-Scalia. There will be a similarly large gap between Kennedy and the group to his left: Stevens-Bryer-Ginsburg-Souter. If Roberts and Alito turn out to be near Thomas and Scalia, Kennedy will actually be closer to the liberal wing. As such, a stronger conservative wing of the court could drive the swing vote to the left. The conservative Justices will have to make sure this doesn't happen, and in doing so will have to moderate their views enough to win Kennedy's support. The liberals will similarly have to moderate their views to win Kennedy over to their side.

Regardless of where the wings of the Court stand, Kennedy is the key vote. With O'Connor on the Court, it was possible to win a majority by gaining either Kennedy's or O'Connor's vote. The figure shows considerable overlap between their estimated locations. The liberal wing could win with either O'Connor's or Kennedy's votes, and sometimes both. The conservative wing required both Kennedy and O'Connor to win.

Now Kennedy stands alone in the middle of the Court. Neither wing can win without him. This gives him tremendous leverage to shape opinions to his satisfaction, and requires both wings to be far more deferential to his views.

The upshot is that conservatives are likely to be disappointed once more with the outcome of a new conservative appointment to the Court. Despite adding Roberts and Alito, the Court is likely to remain a center-right Court, and not a "right-right" Court. Not unless Kennedy changes his positions.

So sit back and watch the huge fight we are going to see over Alito, with claims that the fate of civilization as we know it hinges on his confirmation or defeat. But don't be shocked when the Court fails to shear sharply to the right after his confirmation.

If you want to look for the day of real change in the Court, wait for the next appointment after Alito's. And remember that President Bush had 39 months still to serve. The odds are good that he'll have at least one more appointment. If one of the liberals, or Kennedy, retires, that appointment will be the one that shifts the median in a big way.

(The ideal points presented here are my estimates based on the Justices voting on decisions during the Rehnquist Court. For much more excellent analysis of this see the work by Martin and Quinn here. Their work produce slightly different estimates, but the same qualitative conclusions.)

Posted by Charles Franklin at 1:09 PM