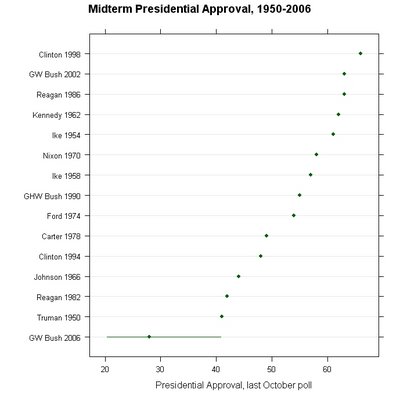 Updated with correction and new graphs at bottom of the post, 5/5.

President Bush's approval rating is on course to set a record low for mid-term elections. The magnitude of the problem is greater than commonly perceived. The previous record low approval in the last Gallup poll of October was 41% for President Truman in 1950. Based on approval trends in 2005-06, the President and Congressional Republicans are facing an election day 2006 approval of between 20.4% and 40.8%. (The range is highlighted in the graph for 2006. The "dot" is the estimate based on the trend in most of 2005, which is less than half the current rate of decline.)

Given these rates, we can estimate approval as of the midterm election on November 7, 2006, 189 days from today.

If the current rate were sustained throughout the year, approval would stand at 20.4% on election day, below the all time low of 22% for Truman. (Gallup cites 23% as Truman's low, and they should know, but there is a February 1952 Gallup poll that appears to show the 22% I cite. I'm trying to get this clarified. Either way Bush would be below Truman's record.)

If the president can rally and sustain the same rate as during November-January, then election day approval would be 40.8%.

And, of course, if approval simply stabilizes at the current level, approval would be 34% on election day.

Approval can surge dramatically, as the aftermath of 9/11 and the start of the Iraq war illustrate. However, such surges commonly accompany dramatic international events and not new domestic initiatives. By their nature, such events are unpredictable. The surge in support is also usually short-lived.

I was frankly shocked at the above results. Other presidents have suffered low approval ratings, and President Bush still stands above the lows of four of the ten other post-war presidents. But I had not appreciated how much the current approval is below other mid-term approval ratings, even without extrapolating current trends. We have simply never seen a president this unpopular going into a midterm election.

I will be surprised if the current rate of decline continues. But I will also be surprised by a sustained upturn at the rate of November-January. Either would be an extreme outcome. But approval between the upper 20s and lower 30s seems entirely plausible. There is no precedent for a midterm with approval at those levels.


UPDATE (5/5): Anonymous pointed out in the first comment below that Truman in 1946 had a 33% approval rating in September 1946 and 34% in November. No October poll was conducted. I left that election out because 1946 is commonly treated as part of the "war years". Political scientists usually exclude the war years from elections models because the war makes them atypical, and I did so without really thinking about it for that reason. However, Anonymous' point is well taken and including that year is an important corrective to my claim that "There is no precedent..." for midterm approval as low as President Bush's current level. So amend that to read "almost no precedent", and thanks to Anonymous for making the point. Also while Ford was relatively popular in October 1974, Nixon in May of '74 was at 25%, which surely had more to do with Republican fortunes that year than did President Ford. (David T makes this point in a comment below.)

Here is the updated graph WITH 1946 included. As you can see, the range of plausible Bush approval is still mostly below even that low Truman 1946 figure, though there is the possibility that President Bush recovers enough to have October readings above Truman 1946. 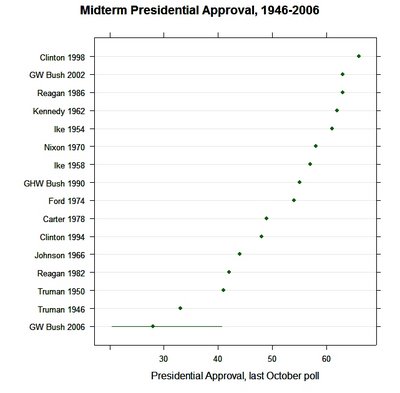 In another comment (and they are all quite good-- worth reading!) Apol asked what we could estimate of October approval based on May approval. As it happens I had just put that graph together and here it. 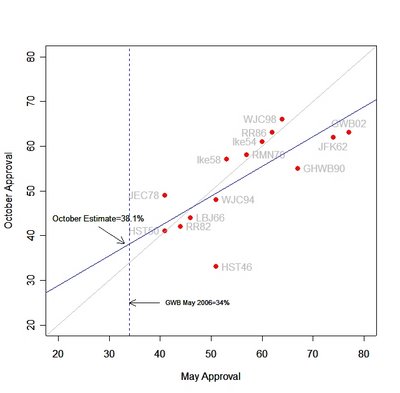 While May approval does predict October approval the fit is far from perfect. The gray diagonal line provides a reference for where October is exactly equal to May. The solid blue line shows the regression line that estimates the best fit between May and October. The slope of that line is less than 1.0, indicating the presidents with very high May approval tend to fall, while those with low approval in May tend to rise. This is called "regression to the mean" in statistics, and is not necessarily due to some substantive political process at work. However, this fit does provide some encouraging news for the White House. Given May approval of 34%, the estimated October approval would be 38.1%. A not huge but certainly welcome move up for Republicans. I hasten to add though that the uncertainty in this estimate is so large as to be virtually useless: a 90% confidence interval is +/- 13%, so somewhere between 25 and 51%!

If you abandon statistics (did I say that??) notice that JFK62 and GWB02 are both coming off crisis rallies and GHWB90 had just abandoned his "read my lips, no new taxes" pledge. If you also let me take 1946 out, then the rest of the cases lie very close to the diagonal line, suggesting that May is a much better predictor of October for most presidents, the exceptions being in the aftermath of a crises or broken campaign pledge. Of course the danger of this kind of nonstatistical analysis is that it is easy to think of a reason to take out cases selectively to bolster your case.

So I'll go back to my original analysis based on the trends in 2005-06. The range of values shown for GWB06 in the dotplots, from about 20% to about 40% represent what I believe are the plausible limits of either further decline OR substantial recovery, and either of those extremes would be surprising to me. So I'd still say that approval in the high 20s to low 30s would seem most plausible, given the trend in approval over the past 16 months. And that remains bad news for Republicans and hopeful news for Democrats. Republicans need some serious successes before November, and Democrats need an attractive alternative platform to take advantage of Republican weakness.


Click here to go to Table of Contents
Posted by Charles Franklin at 2:25 PM